Before we actually start talking about any exercise plans, I need to give you some background on my personal body issues & explain what I'm hoping to accomplish, because my situation may be different from what most people need.

I have a pretty bad relationship with my body, since I have a long history of feeling like it’s “letting me down.” When I've tried to lose weight in the past, I have usually tried to do too much, which led to me feeling overwhelmed, which then quickly led to me feeling bad about myself and my body because I couldn’t keep up with all the goals I’d set, which then quickly led to me giving up entirely.

I need help MODERATING my instinctively frenetic pace, so that I can build a long-term fitness improvement plan, rather than just wearing myself out right away & giving up again [or having a nervous breakdown, which has been the other result of this tendency of mine, but I don't think some random fitness coach needs to be informed about the full extent to which this approach has fucked up my life in all kinds of different areas].

1. I want to lose weight, but I need to start slowly, make it easy to start with, and increase my effort when my body tells me I’m ready, rather than forcing myself too hard and ending up HATING both the exercise and myself. Let's just start with some easy cardio & I'll increase my efforts as feels appropriate.

2. I tend to exercise too hard in order to feel like I'm exercising "enough,” and I think this is a big part of why I’ve ended up hating exercise. I'd like to use machines that integrate a heart rate monitor, because I think knowing my heart rate would help me learn what "exercising enough" means for ME & what it feels like from the INSIDE.

3. I'm wanting to start out with just cardio, mostly on the exercise bikes. I'm interested in training for better bike endurance, especially on hills, so that I can ride with Shannon.

4. I would like to learn how I can use the computer screens on the exercise bikes to help motivate me. What things can they do?

5. I’m also curious about the elliptical machine, which I've never used. What are its pros and cons?

6. I plan to do yoga and weights in the future, but those are not my immediate priority. Perhaps I could make another appointment to help me set up a weights routine in a month or so, when I've gotten into the habit of my cardio workouts?

Took a photo of myself today at the bus stop on Telegraph to document Shiny New Post-Surgery Kimberly Without Glasses (A.K.A. Kimberly With Uncontrollably Bushy Hair That's Growing Out Of A Short Haircut): 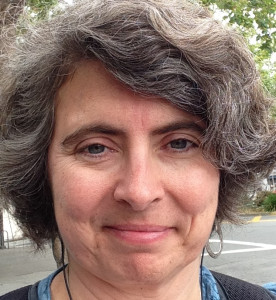 It's me! But without glasses! I'm getting used to that strange person in the mirror, but I still feel like I should take my glasses off every night when I go to bed.

Speaking of cataracts being gone (which I was, indirectly), I biked to the grocery store with Shannon tonight for the first time in I don't know how long. More than a year I think. Possibly since the bronchitis bout of late 2012. Grocery shopping rocks. I chose lots of cool stuff, and it was fabulous to get to choose my own food on the spur of the moment, rather than having to give Shannon a list in advance.

I'm working on a letter to the place that did my second cataract surgery to tell them that I'm very unhappy with the anesthesiologist who treated me. I trusted her to take care of me, but all she did was sedate me just enough so that I couldn't take care of myself, then left me there alone. I gave plenty of on-the-spot feedback about my fear and tension, but she only told me to relax. Before the surgery, when I tried to discuss with her my history of severe anxiety, she just condescendingly told me that everything would be fine, then patted my knee (which annoyed the fuck out of me) and walked out of the room.

Anyway, I figure she'll never change her behavior if she isn't given any feedback about it, so I'm planning to write out my letter tomorrow.

Speaking of speaking, I went to the dentist today (1 cavity, need to return for a second cleaning appointment, need to see a periodontist about 2 spots in my gums that may need grafts—yikes! expensive!) and told him that he offended me the last time I was there (3 years ago), and that I had been reluctant to return as a result. He had been nagging me about coming in more often (it had been 4 years that time) & I tried to explain about our financial circumstances with me on disability, but he cut me off by saying, "I don't care about that," then diving back into his concerns about my long-term dental health. I really didn't like his "I don't care about that," since I felt like it dismissed the entire rest of my life and the way other factors might affect my health issues, including my dental health, but I just slunk away and was silently annoyed for 3 years. I told him how he'd offended me, and he (understandably) said he wished I'd told him at the time, but I explained that I was a lot less confident back then & it honestly never occurred to me that I should. He told me that he could totally see that I'm a lot more confident now, and that this change in my attitude was part of why he hadn't initially recognized me, though I've been his patient for more than a decade & he's always recognized me before. I suggested that it was the short hair and lack of glasses, but he seemed to think that I carry myself differently. I can believe it.

Anyway, we had a great talk, because I know him & I know his bluntness and his sense of humor & I knew he hadn't meant to disrespect me, so it was really more about me wanting to express my feelings & have him acknowledge them than me believing that he actually doesn't see me as a real person & not just one of many paying customers. He was clearly concerned about the fact that he'd upset me & we worked it out & agreed afterward that we were done, it was in the past, and we're good now. He's really cool & I've always liked him, which is why I've been going there so long.

Continuing to speak of speaking, it's now been more than a year since my chronic kidney disease diagnosis, so the law says that we will now never be able to sue my Evil Meds Doc for malpractice. Since I no longer have to worry about affecting a lawsuit, I can now feel free to polish up the review I wrote about his treatment of me & post it to every doctor review website I can find. I may not be able to stop him from doing this to other people, but at least I can try to warn some of them.

In other, non-speaking-related news, I got my letter from the Y, and they're giving me their discounted rate, so I'm going to go sign up tomorrow & schedule an appointment with one of their personal trainer type people to help me set up my workouts (primarily figuring out settings for the cardio & weight machines for my size, strength, and current fitness level). Kimberly's non-dieting, exercise-reliant, health-focused weight loss campaign starts NOW! I'm excited. I'm going to try not to go overboard like I so often do & instead start slowly so I don't get overwhelmed & end up quitting (like I have repeatedly in the past). I'm trusting that my "new attitude" will help with this. I feel confident and optimistic.
Collapse