I don't see my friend Peni very often, but she was my inspiration to dye my hair the first time & to continue trying, because she dyes her hair with really cool ombre effects & encouraged me to stop worrying about the mess and whether it would turn out "right" & just do it. This was November of last year. Anyway, she continues to have an interest in my hair color, but I haven't seen her since this most recent dye job, so I posted a photo on Facebook in which I tried to show a bit more of the variation in the colors:

Another friend, Katherine, tagged someone I don't know in the comments & encouraged her to dye her hair similarly, telling her that this was her color. The friend responded, "I love the color! If I were only brave enough to color my hair like that..."

It made me stop in my tracks. "Brave"? It had never occurred to me that anyone would consider it "brave" to dye my hair. My only concerns had been practical ones. Would the color last long enough to be worth all the time and trouble of the dyeing process? Would it make an ungodly mess? How would I deal with the inevitable roots, since my hair grows so fast? But saying that it's "brave" implies a fear of other people's reactions, and that never occurred to me. I didn't dye my hair to please anyone but myself (okay, and Shannon, since he told me he really liked the idea) & I really never thought about what other people would think. That's why I was so shocked when everyone—friends and strangers alike—responded so enthusiastically and vocally. I still get compliments from complete strangers pretty much every day. And it isn't just people I pass on the sidewalk or meet in the pharmacy check-out line: I've had an old man lean out of a second-story apartment window to yell down that he loves the color, and I've had people call out compliments from passing cars. I've had people—from the contractor caulking our bathtub to my primary care doctor at my annual physical—ask if they could touch it. It's been really surprising, and I think that's primarily because I really didn't factor other people into the equation when I made & executed the Blue Hair Plan.

So it never struck me as "brave," and this stranger's comment on my Facebook post puzzled me for a couple days. But then I remembered that I spent the first 30-40 years of my life doing my level best to be completely invisible, to blend in with the wallpaper, to avoid being noticed at all costs. Life with my violently abusive step-father had taught me that silence and invisibility were my best defenses against the scary things in the world, and I'd taken those lessons very much to heart. I wore the blandest clothes possible, never any bright colors or loud prints. When I got to college, I started wearing pretty much nothing but jeans and t-shirts, a trend that continued up until only a few years ago. I didn't wear jewelry or other accessories. I didn't paint my toenails. I didn't do anything that I thought might make anybody look at me and make any kind of comment.

So I realized that the "me" of 30 years ago would NEVER have dyed her hair this color, not in a MILLION years. The prospect of all those people staring at me every day would have been absolutely horrifying, possibly even terrifying. And then I realized that the "me" of 20 years ago wouldn't have dyed her hair this color, either ... and the "me" of 10 years ago wouldn't have done it, either! But the "me" of today never even worried about what other people would think or if they would stare or if it would make me vulnerably VISIBLE. I did what was once utterly unthinkable by calling attention to myself. There was a time in my life when that would have meant getting smacked, or at least taunted, definitely hurt in some way, but apparently I've left that time behind, because that fear just wasn't in me when I decided to dye my hair blue. It didn't feel brave—it just felt like something fun to do. But the "me" of 10 or 20 or 30 years ago would have considered it unthinkably brave.

So I made this little picture, showing the transformation. This is what 15 years of hard work & therapy can do. 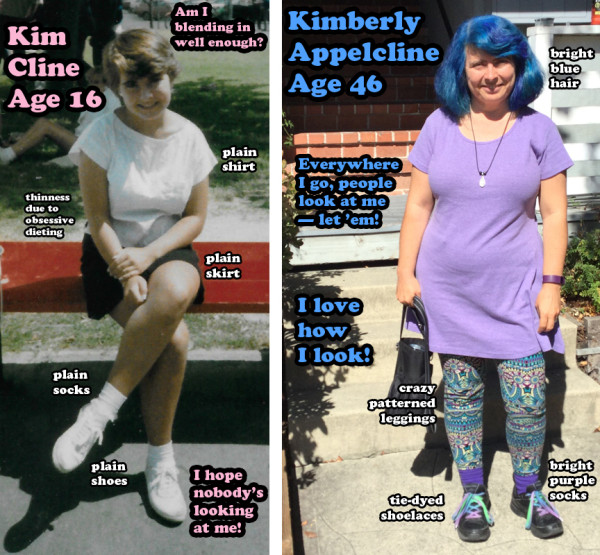