Spent an unhappy 4 hours at the hair salon on Saturday. Now I have interesting blue-and-green hair, but don't plan to return to the same woman who did the job. Here's how the day went:

First, Gina (the woman coloring my hair) showed up significantly late. Maybe half an hour? I wasn’t really paying close attention, just sitting on the salon sofa, playing Ascension on my iPad. But we got started late.

The first thing she did was completely bleach my hair. It was pretty weird seeing myself as a blond for the first time ever! (I should have snapped a pic, but didn't think of it.) The bleaching process took FOREVER. Seriously, Gina spent about an hour just applying the bleach to layer after layer of my thick mane of hair; then I sat about 45 minutes letting the bleach do its damage; then a thorough washing to rid my hair of the bleach; then probably 20 minutes of blow drying (again because my hair is so thick).

Then I got my hair dyed some various sort of randomly-placed splotches of blue and green. I requested a sort of striped look—even brought in a few photos from the Internet to show what I meant: 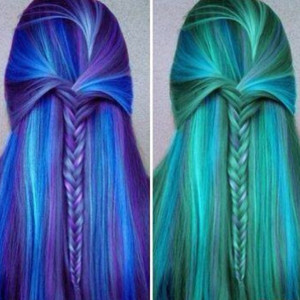 but I ended up with something more like an aquatically-toned giraffe: 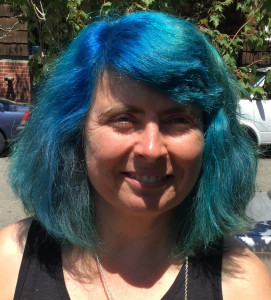 I was surprised by the end result, because we’d discussed my intentions at length before we started, and I had corrected her assumptions repeatedly. I’m okay with the result, but it is not what we discussed.

During my 4 hours at the salon, I was not left alone for more than a minute or two at a time (and even then only when Gina was mixing the bleach paste or preparing the dye), despite the fact that I repeatedly explained that I had brought my iPad to keep myself quietly entertained during the waiting periods. Gina insisted on constantly talking (i.e., complaining about her life) to me, even when we were just letting bleach sit on my head for 45 minutes or letting the dye sink in for an hour. I kept taking out my iPad and starting to play Ascension, but then she would walk up and stand next to me and start talking, and I’m too polite to just say, “Leave me alone!” so I would look up and nod or whatever. So I had a solid 4 hours of NO QUIET. This sucked and made me very anxious.

Along the way, I also listened to Gina spout all kinds of racist crap. She is apparently Philippino and apparently prefers Philippino customers but will tolerate us whiteys, but she had racist things to say about Chinese people, Japanese people, Black people, and … well … pretty much everyone she’s ever met. Every person she talked about (and she had bad things to say about a lot of different people), she mentioned their ethnicity, which I thought was really weird. Why does it matter that the guy who’s really picky about his haircuts happens to be Mexican, Gina? At one point, she started grilling me about my ethnicity, asking if I’m “mixed” (WTF? Isn’t everyone?), if I’m part Mexican, etc. (Was this because I’m picky about my haircuts? Has she decided that this is a Mexican characteristic? Sheesh!) This all sucked and made me mad/anxious/uncomfortable.

I also listened to Gina swear a lot when she was describing various bosses she currently works with or has worked with in the past. Lots of shits and fucks. (She especially dislikes some Chinese woman in Alameda. It seemed very important, this fact that she is Chinese.) Very unprofessional! This sucked and made me uncomfortable. I mean, I swear a decent amount, but I don't expect it from someone in a professional context.

After about 2 hours, Gina apparently became comfortable enough with me that she started calling me “girlfriend.” Like, about a million times. So she’d say something really racist and mean about somebody, then look at me and say, “Am I right, girlfriend?” and then wait expectantly. She wouldn’t look away until I made some kind of response, so I practiced a wide variety of non-committal noises. She had a fair amount of power over the fate of my hair at the moment, so I didn’t want to say, “No, bitch, you are not right. You are a bigot who seems to hate pretty much everyone and has nothing good to say about anything.” So I just made “um” kind of noises and avoided eye contact as much as possible.

About 3 hours into the process, the owner of the salon (where Gina "rents a chair") began yelling quite angrily and aggressively at Gina for taking too long (requiring the owner to stay after closing time so that Gina didn't just abandon my dye job half-finished). I surmised from various things said during this yelling that Gina has done this before and so the salon owner is justifiably upset but really quite unprofessional to let loose with this diatribe while a customer was sort of trapped there to witness it. At first, Gina offered to wash the dye out of my hair sooner to get us out of there on time, but I gently but firmly reminded Gina that I was spending a lot of money and wanted her to follow the directions on the dye box, because it would suck to spend all that time and money, then walk out and have the color not stay because she wouldn’t let it sit for the necessary amount of time. As it is, she let it sit for less time than I did when I dyed my hair myself (I waited about 2 hours, about twice as long as we did this time), so it may not last as long this time, but at least she did wait the minimum amount of time indicated on the box. I felt proud that I stood up for myself, even in the face of the salon owner foaming at the mouth. (When I left, I thanked the salon owner for staying late so Gina could finish my hair, and she was very nice about it. It was like a Jekyll and Hyde sort of situation. These two ladies really freaked me out.)

And lastly, to top it all off, over the course of the 4 hours I was there, I got some ridiculous amount of hair forcibly yanked out of my head because Gina insisted on combing it during pretty much every stage of the process. My thick, wavy hair tangles too much for a normal comb even when it's at its best, let alone when it is full of dried bleach paste! She just kept aggressively pulling this damn comb through my hair, over and over again, with chunks of my hair coming out, despite my repeated protests of pain and concern for the breakage of my hair. Unfortunately, I had become so anxious (as a result of not getting any quiet time, the racist rants, the salon owner's rant, the concern for my hair, and my awareness that Shannon had been expecting me home hours ago) that I wasn't in an emotional position to be forceful, and so I just kept quietly pointing out that she was hurting me and breaking my hair, and never said, "Stop doing that!" So I’ve been sort of beating myself up in a “blame the victim” sort of way, because I told her she was hurting me but never said, “Stop it.”

So, as you may have guessed, I will not be requesting Gina’s services again. I don’t even want her to be my bang-trimming gal anymore, let alone come near me with dye and that fucking comb! When I told my friend Crystal about Saturday’s experiences & that I plan to just dye my hair myself from now on, she said that she would be happy to help me, and together we could work on getting me the kind of stripes I originally wanted. It sounds like fun! So now I’ll just wait for this color to start to fade & my gray roots to start to grow in, and then Crystal and I can have our own hair-dyeing adventure. With no racism, no swearing, no yelling, and no hair pulling.
Collapse