Okay. I'm never going to make this a well-thought-out entry in my current state, so I'm just going to jot down my jumbled thoughts so that I can get this darn issue out of my brain, at least a little bit. This is going to be full of inconsistent capitalization, especially, and probably some who/whom misuse, because I can't seem to make myself care enough to sort it all out right now.


There is a person who, for the sake of simplicity and privacy, we shall call ArtMajor (because she obtained a B.A. in Art from a Cal State U), and who paints (primarily in oils), and who we shall posit to be female (simply for the sake of averting awkward pronoun-avoidance contortions). When I have referred to my collages as "artwork" in conversation, this person has asserted repeatedly that the collages I do are not, in fact, art, but are, rather, crafts. (Note: Let me point out here that she seems to use "art" and "fine art" interchangeably, only making a distinction between "art" and "craft." I shall therefore do likewise here.)

She has explained her Art/Craft distinction thus:

Fine art is something you totally create with your own mind and hands.  Like painting and drawing.  You take a blank piece of paper or canvas and everything that ends up on it comes from your own mind.  There is nothing used that isn't your making.  Crafts is where you take things that exist and put them together to create your own work.

Let us ignore the many small sillinesses here (such as the fact that she does not make her own paint) and instead focus on the definition as a whole. I checked out the OED, Merriam-Webster, the MacMillan Dictionary, Wikipedia, and some more specialized art-specific dictionaries and encyclopedias, and they all defined "fine arts" as some variety of

creative art, especially visual art, whose products are to be appreciated primarily or solely for their imaginative, aesthetic, or intellectual content

That particular quote is from the OED, but all the dictionaries said the same with slight variations in wording. Nowhere do any of them specify that "fine art" can't use stuff you've cut out of magazines and books. In fact, as I began doing my frustrated, offended, huffy-puffy research, I learned that the term "collage" was coined by Picasso (whom some people may consider an "artist") in 1912/1913, when he began creating pieces like these: 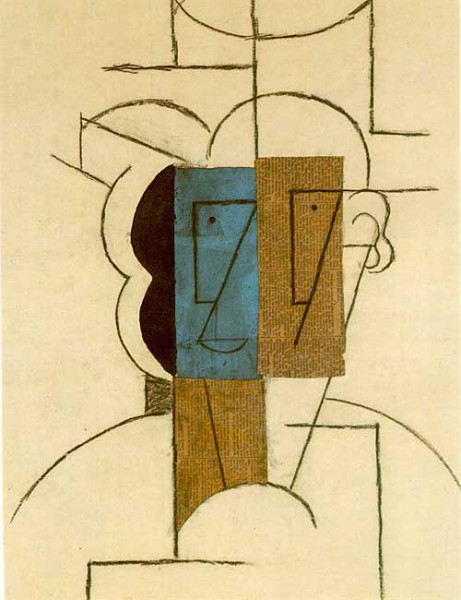 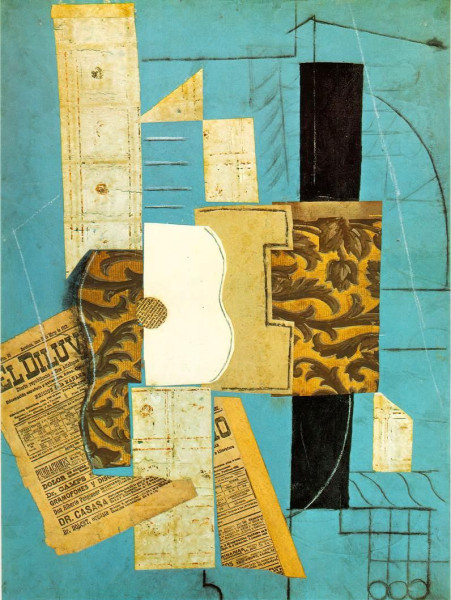 I happen to know that ArtMajor was a big Picasso fan when she was in college (and even went through her own fangirl Blue Period, when she painted only in shades of that color), though I don't know what she thinks of his work now. Maybe she considers some of his works art, and others to be crafts, because some include bits of newspaper, wallpaper, ticket stubs, etc. In fact, once I started thinking about it, I wondered if she'd simply avoided all the classes on modern art altogether, or maybe she doesn't consider "modern art" to be "art" or "fine art."

But as I thought about this more and more, my incredulity began to grow by leaps and bounds. Who cares what definition the dictionaries give? Who cares what they teach at Cal State Universities? Who cares what any particular person thinks? Who defines "Art"? Should artists listen to the definitions other people impose? What if the Impressionists had listened? What if Picasso had listened? Are artists supposed to follow rules and stay within little boxes that other people define? Are we supposed to color inside the lines? Is coloring inside the lines even art? Is it even art if you listen to how somebody else tells you to do it? Why? Why not?

I tried to reason out why her stubbornness on this issue matters to me (and, presumably, to her, or why else would she continue to insist on the differentiation?), and realized that there's a sort of cultural elitism suggested by drawing a line between "Art" and "Craft." As one article I read asserted, "‘art’ has a positive evaluative connotation that ‘craft’ lacks.” Ask people to name a famous "artist," and most will be able to do so: Picasso, or Michelangelo, or da Vinci, or van Gogh. Ask them to name a craftsman, and they might point to a guy down the street who whittles. Ask that same person to name a famous work of art, and they might mention the Mona Lisa, or van Gogh's "Starry Night," or the Sistine Chapel. Ask them to name a famous work of craft, and you're going to get a blank stare.

There aren't any Teenage Mutant Ninja Turtles named after people who do "crafts."

Basically, in our culture, "Art" is important and valuable and famous. "Craft" is the quilt on your bed, the bowl that contains the soup you eat, and possibly—if you're rich—the chair you sit on while you eat that soup. More likely, in most people's lives, "Craft" is the dough ornament your kid makes to hang on the Christmas tree.

ArtMajor primarily defines herself as a painter (though she has also always done various crafts like quilting and "shadow boxes"), and seems to be trying to insist that her work is better than mine. In fact, she seems to be actually constructing a definition of "Art" (or "Fine Art") that elevates her own creative status above mine, whether she's doing so consciously or not. I am quite certain that her art classes in college did not provide the definition she presents to me now, because I'm pretty sure they would have defined Picasso's collages as "fine art." This is her definition, one that denigrates me and my work for some reason I can't quite fathom. She is an "artist," according to her own definition, and I am not. She is in the same category as Picasso and Manet and van Gogh and all the other "artists" she loves, and I am not. I am the kid making the dough ornaments.


But here's what I think: I think none of it matters. I think metaphorical boxes can sometimes be useful, but more often are not. Very few things in the world are truly black-and-white or linear; very few concepts ("Art" or "Craft" or "Race" or "Gender" or whatever) can be sharply delineated; very few can be truly objectively defined. Is it art or craft? Am I straight or gay? Am I old or young? Am I fat or thin? Why do we try to create these artificial dualities?

I don't like to draw barriers, lines between This and That, Self and Other: it's one of the things that immediately drew me to Buddhism. One of my favorite book quotes comes from near the end of Michael Ondaatje's The English Patient:

I believe in such cartography—to be marked by nature, not just to label ourselves on a map like the names of rich men and women on buildings. We are communal histories, communal books. We are not owned or monogamous in our taste or experience. All I desired was to walk upon such an earth that had no maps.

That last sentence, in particular, resonated inside me when I first read it, and has continued to do so every time I have read it since: "All I desired was to walk upon such an earth that had no maps." That's me.

I guess maybe most people like maps, like to know where the lines are drawn, where the boundaries lie, what is This and what is That, what is Here and what is There, who is Us and who is Them. I prefer a more organic approach. I prefer not to say, "This is art and that is not. This is beautiful and that is not. This is success and that is not. This is a family and that is not." I still say those sorts of things sometimes, of course. Sometimes I say them because they're useful (negotiating healthy relationship boundaries, for example), and sometimes I say them because I'm just as stupid as any other human & don't notice that I'm being a hypocrite. But I desire to walk upon such an earth that has no maps. Let us all navigate for ourselves. Feel free to point out when I'm messing up in this regard, and I'll almost always thank you for it.

Again, here's what I think: Art is about creativity, about creating something unique, something no one else could have produced, because it comes from inside you. Art is about looking inward, thinking for yourself, and being willing to push boundaries (your own or society's). I believe that Art, at its core, is about expressing your own truth in whatever way best communicates that truth. My own art has frequently incorporated text because my identity for the first 30+ years of my life was all wrapped up in reading and writing, and because that sense of identity has been warped by my difficulties with written media in more recent years. Visual art became a way for me to express myself when words failed me, and I have used language as a physical object in collage, because language is still meaningful to me, to my own sense of self, though now in different ways. Many of the things that I have needed and wanted to express could only be communicated with the use of words as physical objects, with language turned into something I could visually manipulate. I'd try to explain why, but I can't really do it by telling you in words. That's the whole point. 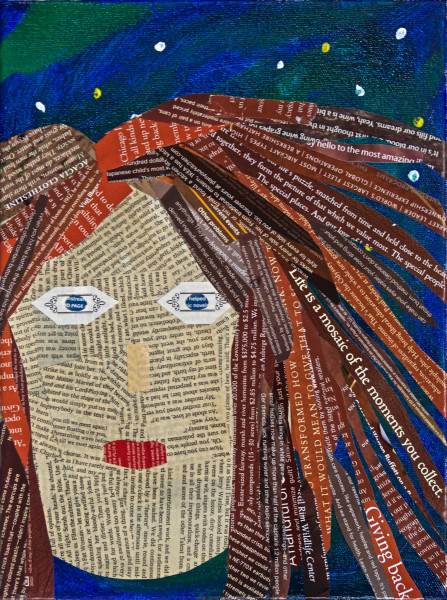 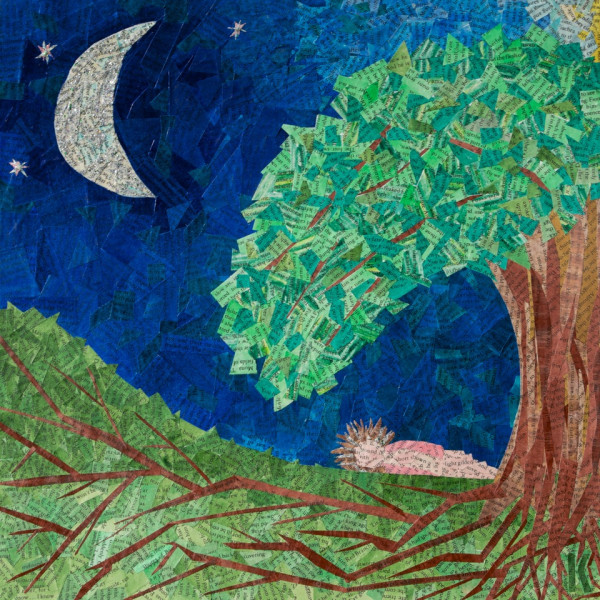 In addition to the two-dimensional stuff I can hang on walls, I also do decoupage of more useful-type items (a mirror frame, a box, a dresser), which feel more "craftsy" to me, but it never occurred to me to draw any kind of definitive line between the different types of projects, because that isn't particularly useful to me. Sometimes I just draw or paint; sometimes I do collage; sometimes I combine those media; sometimes I do something completely different. Regardless of the materials, it's all me expressing myself—the process isn't different inside me, so why should I consider some of the results "art" and some not? The only time I felt like I wasn't really doing "art" was when I tried to produce things to sell in my Etsy shop. Then I started thinking about what stuff other people might want to buy, instead of focusing on what I wanted to create, and then it stopped being art for me—it turned into product.

Okay. I don't have any grand finale to sum up my thoughts. I'll just go back to Michael Ondaatje: "All I desired was to walk upon such an earth that had no maps." Don't show me the map you've drawn. Don't tell me what country you think I'm in. Just let me walk along, let me experience what the ground feels like beneath my feet, let me try to express what that experience is like for me. You don't have to like it. You don't have to think it's "art." But if you don't like it, don't try to convince me that I suck. You might succeed better than I would like, but you won't succeed as well as you would like, either, and so neither of us will be happy.

Let's just all do the things that make us happy. One of those things for me is art. And crafts. And everything in between and possibly along other related-but-not-linear axes as well. If what makes you happy is running other people down, telling them they and the things they make aren't as worthwhile as they think they are, please do it far away from me.

Okay. My head hurts. This journal entry, cobbled as it is from various notes and scribbles, has taken me about two days to complete. I'm going to go take a nap.
Collapse