The Latest in the Saga of Pain

Headache. Today it started getting really bad by 2 pm instead of waiting until its usual 6ish, and eventually—in the 7, 8, 9 pm range—I spent a couple hours in such pain that I would have rated it a 10 on the 1-10 scale ... i.e., the worst pain I've ever experienced. Not fun. Really not fun. Quite a bit of helpless crying. At least I'm seeing the pain management doc tomorrow & can discuss this with him.

I'm still not particularly interested in the inpatient option—as opposed to the slow dosage reduction option—since the pain hasn't been bad enough that I really feel that I can't stand it. I can put up with a lot of pain. But I'm not sure how much pain it's reasonable to withstand before the inpatient option becomes the smarter choice. Sometimes I put up with pain that is truly unnecessary, just because I don't want to "give in to it" and admit that it has defeated me. Stupid. But common for me. I don't like to whine, and sometimes it leads to putting up with stuff that it makes no sense to put up with.

I'm not sure if my insurance would even cover the inpatient option, of course. That's one of the questions I plan to ask the Pain Doc tomorrow.

I saw my meds doc today, and he seemed puzzled by the pain doc's suggestion of the 1-week inpatient method of getting me off the codeine. Meds Doc says that he has worked in the inpatient drug rehab wards, and they were peopled by patients with MUCH more severe drug problems than mine. Really, the amount of Tylenol #4 I'm taking is a dosage that some people could take long-term with no difficulty. It's a legal, physician-recommended dosage. It just happens to be causing me significant problems. But Meds Doc allowed that Pain Doc knows more about the situation than he does, and that the type of withdrawal effects (e.g., the severity of the occipital neuralgia headaches) might be a significant factor. He said that the pain management doc would have to go to bat for me if we decided to go that route.

Meds Doc agreed with Pain Doc's suggestion that increasing my Neurontin dosage could help with the headaches. Apparently, Neurontin (which I have been taking for a combination of mood stabilization and anxiety relief for more than a year now) is also commonly prescribed for pain ... especially nerve-related pain, which is exactly what I'm experiencing.

Up until now, I've been taking 300 mg/day of Neurontin (100 mg 3 times/day), which is a very low dosage. Meds Doc explained that when it's used to treat headaches, the drug is prescribed in much larger amounts. So he doubled my dosage but warned me that it may be sedating. Ha! I don't give a damn about sedation if it means I'm not having Level 10 headaches! He said I could take the pills in any combination that works for me. Since my headaches tend to start getting really bad around 6 or 7 pm; and my usual pattern of taking Neurontin is 100 mg with breakfast (usually around 9 am), 100 mg after dinner (usually 6ish), and 100 mg at bedtime (usually 1ish), I've decided on the following plan: As of today, I'm trying taking 100 mg around 9 am, 200 mg around 6 pm, and 300 mg at bedtime. We'll see if it helps. At least I know it's unlikely to cause any unpleasant side effects, since it's a med I've been taking in smaller doses for quite some time already.

My gum graft surgery is coming up on Friday, after which my activities will be severely limited for a week. The minimal post-op instructions I was given when I scheduled the appointment (more detailed post-op instructions will be coming after the surgery, but I plan to ask the receptionist tomorrow if she could scan and email them to me, so that I can be more prepared in advance) indicated that I should "avoid heavy physical exercise" for an entire week after the surgery. This doesn't sound bad—I was picturing mixed martial arts, aerobics classes, water polo, etc.—but among the examples of this "heavy physical exercise," they list "bicycling," "yoga," and "hiking." Those are "heavy physical exercise"? How lazy are their usual patients?

So I've emailed the surgeon to ask which of my habitual daily activities (and I gave specific examples) would be too much. For example, walking briskly up and down stairs (which I do constantly, both at home & at CWC), walking a mile at a time (this is still very common for me—almost every day—even with the plantar fasciiosis acting up), carrying laundry baskets, etc. Too much moving around can cause the grafts to become dislodged & not heal well, and I obviously don't want that, but neither do I want to be overly cautious and therefore more bored-to-death than necessary. I don't want to just lie on the couch all week if that's not actually needed.

In preparation for my definite reduction in activity (and possible significant time cooped up in the house) for the entirety of next week, I've been buying myself some exciting new art supplies to play with. Right now, coloring is really the only thing that distracts me well from the headaches, and I figure it will also distract me from the boredom (and the unfortunate simultaneity of the headaches and the boredom, which I can't help but predict).

So I've been perusing my Amazon wish lists a lot & buying a few things off of them. Today I bought a big set of Prismacolor colored pencils, which excite me ridiculously much. I can't wait to use them! They're a huge present to myself, and they were on HUGE sale, so I don't feel too bad about spending the money.

Today I also went to Artist & Craftsman & bought a few different types of colored pencils from different manufacturers so I could test them out, since each one has different characteristics. I've found that the higher-quality pencils (like Prismacolor, Koh-i-noor, and Bruynzeel, which are the 3 brands I'm currently experimenting with) differ tremendously from the cheapo Crayola ones I've been using for years! The colors are better (brighter, more nuanced) & they require less pressure to produce a nice saturation.

I've also still been using gel pens, of course, which are even brighter and more saturated. In fact, I've been combining a lot of different media in the same pieces, because I like how the different color saturations and styles look when placed next to each other. I've mostly been using colored pencils and gel pens (including basic gel pens, metallic gel pens, milky pastel gel pens, and glitter gel pens), but I've also been experimenting with watercolor pencils (though they are a bit hard on the thin paper of the coloring book). I'll try to post some photos of what I've been doing, but they need a bit of cropping & color adjustment to make them look more like they do in reality.

Anyway, so I've put myself a bit in debt to buy my exciting Prismacolor pencils, but I think they'll be worth it. (And I figure I won't be spending much money next week, anyway, since I won't be able to go anywhere much & won't be eating out, so a bit of debt isn't a big deal & will be made up almost immediately.) I want some stuff to be truly excited about when I'm trapped in the house & unable to move around as much as I'm used to ... while simulaneously being restricted to an entirely non-chewing diet. It'll be a challenge. Preparing a bit of fun in advance seems smart. :)

My intern at CWC says I'm being very creative in how I approach this whole situation. She likes how I'm thinking in advance about varieties of foods I can eat so that I don't get too bored & varieties of stuff I can do to keep myself from getting stir crazy and/or dying of headache overload. I was flattered. I like to think of myself as a creative person in most areas of my life—even stuff like relationship problem-solving, furniture rearrangement, hair issues, and other random things—but it was nice to hear the compliment from someone whose opinion I respect. :)

I also plan to watch some familiar, beloved tv shows and films over the course of my recovery period, because "watching" tv while coloring at the same time seems to be the #1 most effective way of distracting myself from headaches. I'm thinking about "Firefly," "Serenity," "Queer As Folk," "The Princess Bride," "Reality Bites," "The Wedding Singer," "So I Married An Axe Murdere," "The Breakfast Club," "Casablanca," etc. I'll see what we have on DVD & what's available on Netflix streaming.

I'm optimistic that I'll be able to get through this week of inactive, non-chewing recovery without it being too terrible. Cross your fingers for me!

Right now, my head is feeling a bit better, but I'm absolutely exhausted by a day of intense pain and distress (possibly also sleepiness caused by the increased dosage of Neurontin). I think I'll try to sleep soon. 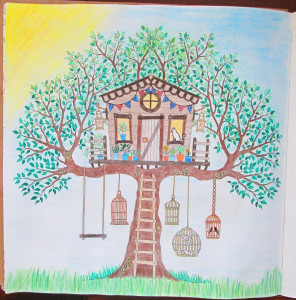 Treehouse in mostly colored pencil and basic gel pen, with a bit of metallic gel pen here and there. The sun, sky, and most of the grass are done with watercolor pencil. 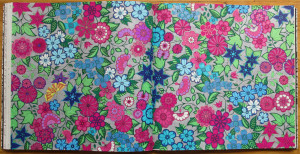 This was my first experiment with coloring in the entire background, which I did here with a silver colored pencil. I rather like how it turned out. 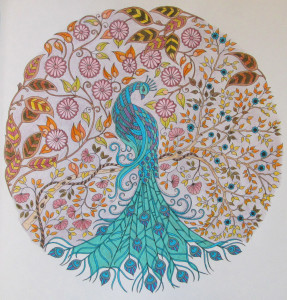 I'm not so fond of this one. My goal was to make the peacock really striking, so I colored the peacock entirely in glitter gel pen & the background entirely in drab colored pencil, but it didn't turn out as exciting as I had hoped. 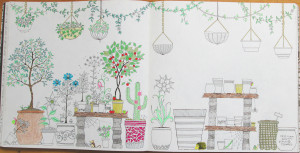 This is the "potting shed" spread when I had only just begun coloring it in. Notice that the right-hand page has only one plant on it ... the rest of the pots are empty, with a little note in the lower right-hand corner encouraging the colorer to draw in some of their own. 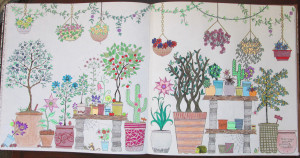 This is the "potting shed" spread after I had finished it. Notice that the right-hand page now has quite a few plants that I had drawn in myself. I'm quite proud of this one, as I'm not usually comfortable with drawing & tend to judge my "skill" very harshly. I just relaxed and had fun with this, and I'm fond of the result.