Saw the gastroenterologist about the nausea. I looked back at previous journal entries before I went to see her, and realized that it's really only been about a month that the nausea has been better. I'd thought about canceling the appointment, but one month of very little nausea seems insufficient to nullify a year of terrible nausea. Maybe it's all over ... maybe not ... but it was worth still seeing the doc. She wants me to have an upper endoscopy in a couple weeks, just to make sure there's nothing like an ulcer. We don't expect that she'll find anything, but she'd like to just make sure.

I had an upper endoscopy about ten years ago (described in a journal entry here), and it was rather traumatic. They didn't give me enough anesthesia, and so it was all very woozy and nightmarish, with these strangers shoving this pipe down my throat while I gagged and choked and was instinctively terrified. Dr. Higa assured me that it will be less traumatic this time. Lisa's going to drive me there & back, so I'll have a comforting presence to make it less scary.

We're making Mardi Gras masks in the art room this week. This is the one I made: 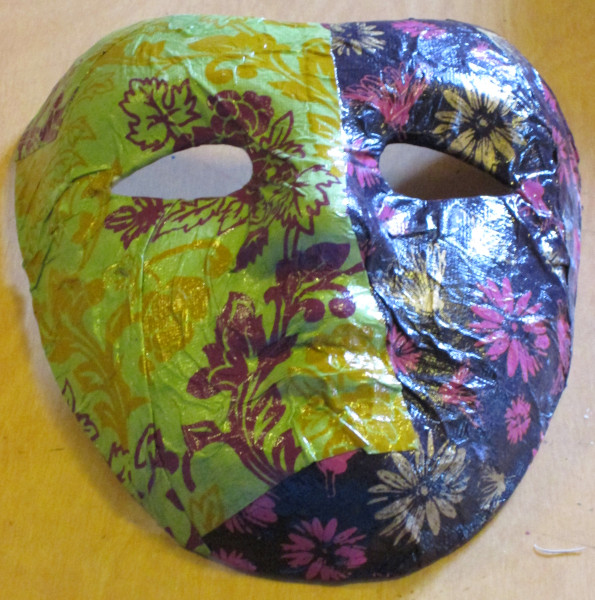 I like how the texture turned out, how you can clearly see the shape of the face (which was a blank, white cardboard paper frame at the start), but also see the fabric-like wrinkles of the paper I decoupaged onto it. I'd planned to decoupage more stuff onto it, but when I got to this stage in the process, I liked the look so much that I decided to leave it as is.

I got a bug in my ear yesterday to make myself a calendar, with various pieces of my various kinds of art as the images, instead of someone else's art. So I started gathering up files on my Mac: scans of pages from my collage books, scans of other art pieces I've done, digital collages I've done, etc. I have enough to make a calendar, so maybe I will. I was thinking of doing something for 2015, but maybe I'll make one for myself for the rest of this year, as well.

I'd originally thought of doing a calendar of my art as something to sell on Etsy, but now I'm just thinking about doing it for me. I'm really not in a head space to think about doing art for other people right now.
Collapse