Yesterday's Art Slam at the de Young was a bit of a bust, unfortunately.

The slide show was not at all what I was expecting, as some of my CWC friends had participated in previous years and had told me that each slide was shown for only a few minutes. It turned out that each piece was shown for only about 15 seconds. My collage randomly turned out to be the very first piece shown in the 3.5-hour show, and the organizers did not in any way announce the beginning of the show or attempt to draw everyone's attention, and so my piece had shown and disappeared before most people even realized that the slide show had begun. I might have missed it myself if my nearby CWC friends hadn't exclaimed and pointed at the screen.

In addition, the man sitting directly behind me had some social impairments that led him to express rather extreme enjoyment of about 75% of the slides shown. He kept gasping loudly and exclaiming to his companion how amazing each piece was, and my anxiety started ramping up and up and up. Eventually, I asked Lisa and Shannon if we could move several seats to our left to get away from him, and that made a huge difference, but I didn't ask until long after I should have, and so I was freaked out enough that my anxiety didn't really abate after we moved.

But the whole event was rather anxiety provoking, with too many people to talk to and introduce to each other and people wanting me to be in certain places at certain times and yet seeming very disorganized and the museum crowds rushing and thronging and bustling (as much of the "organized" stuff happened in a main courtyard which is extremely busy). It all felt very chaotic.

The seats in the Koret Auditorium, however, were shockingly cushy. That was a plus.

Here's a photo Shannon took of one of the "organized" moments, when the organizers tried to gather some of the represented artists to take a group photo: 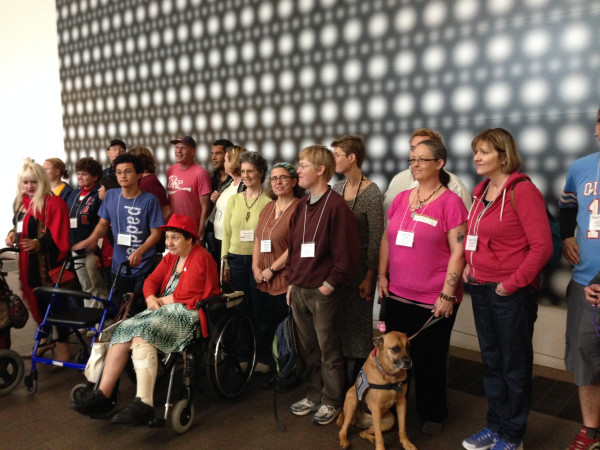 There were more people than you can see here, because the group was having trouble squishing together enough to all fit in one photo, but you can see me in the center (wearing a brown blouse and multi-colored headband) talking to one of my friends from CWC.

Still feeling very down, as I have been for several days now. Just withdrawn, not wanting to interact with anyone (including poor Shannon, who is mostly being ignored), not interested in doing anything. Today I did dishes and laundry like a robot, just trudging from one task to another. Then I just sort of randomly watched some "NCIS: Los Angeles" episodes from the beginning of this season, became a bit invested in one of the continuing character-oriented subplots, and then realized that our Tivo is no longer recording the show because it conflicts with other things higher up on our priority list of season passes. So I cared a very tiny bit about something stupid, then discovered that it is gone.

As per my meds doc's recent instructions, I'll be increasing my Zoloft dosage to 50 mg tomorrow morning. He's concerned -- understandably so -- that if we increase the dosage too much or too quickly I'll end up hypomanic again, and the swinging back and forth can lead to deeper and deeper depressions. Right now I don't care much about anything, but at least I'm not hoarding pills or "making plans." I'm just blank.

I haven't done any art in days. The closest I've come is going through magazines and tearing out stuff that looks like it could be useful for collage in the future. When I saw her on Wednesday, my therapist urged me to do some art or writing, but I just haven't been able to pull anything out of myself. There's nothing there. I just look at a piece of paper and I'm empty. I have to feel something in order to do art, and I just don't feel much at all.
Collapse