Since I took so many books of the bookcase in my office while organizing my art supplies and making them more accessible, we had a sudden bookshelf shortage, so yesterday Shannon and I spent what felt like hours, going through every single book on every single shelf of 13 large bookcases … holy mackerel! But we needed to make some room by getting rid of things. We weeded out tons of books. TONS. I tried to get rid of all the Dickens, but Shannon wouldn't let me. Le sigh.

Anyway, I calmed down a lot yesterday once I had time to think about the fact that I was feeling hypomanic. That's often happened in the past: it's like there are two Kimberlies, one that is hypomanic, and another that is rational and looking at the hypomanic feelings and recognizing them. So I had a good day and wasn't too wacko.

Still did tons of work on the art projects, though, and I once again only slept 5 hours last night. I got up around 5:30 this morning and started working on various things again: sorting old writings and photo stuff for the art projects, going through all the random papers I got when my Dad died (like old bills and stuff -- I just never got around to going through them and throwing out the unimportant stuff until today), folding laundry, putting some dishes in the sink to soak, and probably some other stuff I'm not remembering right now, because I once again have gazillions of gallons of energy to spare.

I've been going through a lot of old scrapbooks, old school stuff my mom sent me (book reports from 4th grade, stuff I drew in kindergarten, that sort of thing), stuff people sent me about my Dad, all kinds of random things, and as I've been gathering things for my collage book about my sense of self (which I have been calling "THIS IS MY SELF," to go with "THIS IS MY BODY," THIS IS MY ANGER," etc.) I've realized that it's going to have to be more than one book, because I've just got too much stuff, and it all feels important. I've been sorting through stuff I wrote about my life in elementary school, comments on books I read (such as Trumpet of the Swan, in which I apparently was very impressed with how supportive Louis's parents were despite his disability, and how they always helped him), and pulling out the stuff that seems somehow resonant with the person I've become, the person I am now. So I'll probably do a few separate books on my sense of self regarding some of these topics, and probably more (as patterns emerge as I gather materials):Those are just some of the patterns I've seen emerging in the materials I'm gathering. This is really interesting, like a really fruitful, visceral adjunct to therapy, approaching similar issues but from a visual standpoint instead of verbal.

Despite feeling hypomanic yesterday I started feeling a bit down in the afternoon, oddly enough, because I've had this great self-esteem over the last couple weeks (maybe longer?) -- about my art, about where I am in my life, about how I do relationships, etc. -- and all of a sudden I saw "inflated self-esteem" on that list of hypomania symptoms, and this little voice inside my head said, "See? You're not all that great. You thought you were amazing and fantastic, but it was just your brain chemistry lying to you." So suddenly I felt like I'm not amazing and fantastic, that my art isn't as great as I thought it was, that I've just been fooling myself and probably looking very foolish. I was feeling embarrassed that I'd possibly made myself look vain.

So I'm going to try to hang on to some of that sense that I'm amazing and fantastic, that my art is worth something, even if it's only as a way of expressing myself and working out various feelings and issues, even if no one else ever thinks it's good. Because maybe I'm not the greatest thing since sliced bread, but I'm probably more amazing and fantastic than I've usually thought I was in the past. Things skew in different directions. I'll try to find a more balanced view, but it's hard to see yourself clearly. Or, at least, it's hard for me to see myself clearly. There's always some kind of editorial filter.

But, speaking (or, more accurately, writing) of my art, as I was a paragraph or two ago, I took a photo of me in the CWC art room last week with my recent cherry blossom collage (which will be submitted in the contest I mentioned in some earlier journal entry), but I forgot to post it: 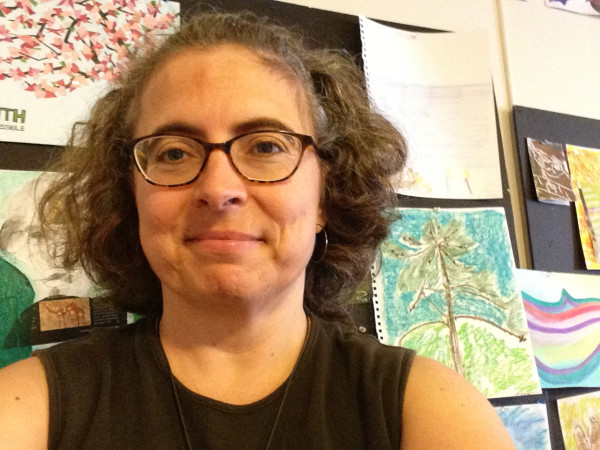 You can see a bit of my cherry blossom collage in the upper left, and there's another little random thing I drew (with all the colored curving lines) in the lower right, but I don't know why they put that on the board. I was just doodling around one morning when I couldn't think of anything to do.

And now I must finally start getting ready to leave, after a good 3 hours of puttering and working and generally getting things done. Finally time to start the day!
Collapse