After receiving my email detailing the electrician's findings re: the cause of our electrified tub and shower fixtures, our formerly beloved contractor replied simply, "I'm sorry that happened" (actually, "I'm sorry for that happen," because English is not his first language, but I knew what he meant).

Apparently, in Ting's world, electrified bathtubs just happen. It may not be literally passive voice, but in meaning it clearly is. Sigh. Next time we want work done on our house, I'll be searching for a new contractor.

In other news, last night at the Sockshop I bought some cool socks that totally remind me of Fruity Pebbles: 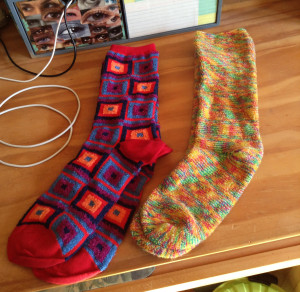 (Included in the photo is another pair of socks I bought at the same time. Both are very soft, and I can't wait to wear them!)

I saw my usual doctor today (as opposed to the unfamiliar one I saw last week because mine wasn't available), and after a thorough examination she said I'm still much sicker than I thought. Curses! Apparently, bronchitis lingers, so I'm still highly contagious and my immune system is still compromised. I'd been unconsciously basing my analysis of my current state of health on a comparison with how I felt last week, so I thought I was doing pretty well, but it was only as compared to horribly horrible horribleness.

Apparently, the doctor I saw last week was pretty worried by how bad my bronchitis was & had a talk with my usual doc about her concerns. She apparently described my bronchitis as very serious. Yikes! I knew I felt terrible, but I always question my own judgment and wonder about possible hypochondria, so I didn't know how my bronchitis rated on the General Bronchitis Scale of Badness. Apparently, I've got a particularly bad case.

But I'm now sleeping through the night and I don't feel like my chest is going to explode right out of my chest when I cough (which is admittedly still pretty frequent), so I've been feeling like things are pretty damn good. It kinda sucks to be told that I'm still really sick.

The doc said that she strongly urges me to continue to mostly quarantine myself for at least 3 more days (more if I'm still coughing), try to rest most of that time, continue taking my bronchitis meds, etc. Compared to last week, I feel like the picture of health & I'm sick of being stuck in the house, so I'm frustrated. But I don't want to drag this out longer than is necessary, and my doc warned me that I could have a drastic relapse if I don't take good care of myself, so I'll be a good little girl and take it easy.